From the high-desert canyon country to the ponderosa forest of the Kaibab Plateau, there are hundreds of hiking trails within a short distance from Cliff Dwellers Lodge. Regardless of the time of year there are hikes to suit each individual’s interest and skill level. Summer months are very warm and it is necessary to carry lots of water … at least two gallons per day per person is recommended. Never hike solo and always let someone know where you are going and when to expect you back. Stay on designated trails and wear proper clothing for the time of year. A wide brim hat and light long sleeve shirt are recommended for summer months along with plenty of sunscreen. Warm clothes and a water-proof jacket are necessary during the winter months.

Whether it’s historical interests, the Colorado River and its trout fishing, or the stark natural beauty of the area, any hiker can find solitude.

Cathedral Wash Location: Two miles after the turnoff to Lees Ferry from Marble Canyon is a pull out on the left hand side of the road. There is a Park Service point of interest sign here and the trail begins in the wash bottom another 50 yards down the road.

Hike Description: A two-hour round trip hike which takes you through limestone narrows to the Colorado River. There are a couple of short drop offs which can be avoided by hiking the upper shelves. The song of the canyon wren can be heard year round and an occasional red tail hawk can be seen. This canyon is subject to flash flooding during summer rain storms. Before entering the canyon check local weather reports. The trail ends at the Colorado River in the Marble Canyon gorge where you can fish and enjoy the solitude. This is a day use area only where overnight camping is prohibited without a permit issued from the Park Service. 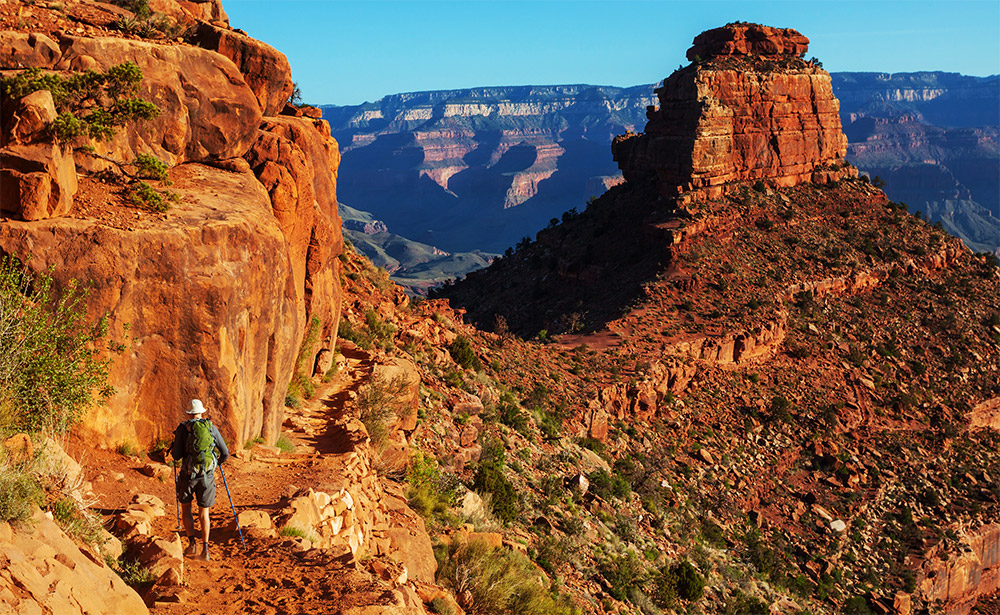 The Honeymoon Trail: This trail ran right through the Cliff Dwellers Lodge property and was the historic old wagon road linking St. George, Utah with Lees Ferry on the Colorado River; and from there, to numerous settlements throughout northeastern Arizona. The route was used for several years by young married couples from Arizona seeking Temple marriage in what was then the only “Mormon” Temple west of the Mississippi River.

In 1877, the St. George Temple was completed and in 1881 the first of the settlers made the journey to St. George over what would eventually become known as the “Honeymoon Trail.” The trip took 3-6 weeks, with the worst section being the crossing of the Colorado River. Earlier, in 1870, Brigham Young had sent John D. Lee to establish a ferry and by 1872 it was fully functional. Lee worked the ferry until 1874, after which it was manned by the Johnson family until 1896. In 1928, Navajo Bridge was built, replacing the ferry.

Much of the Honeymoon Trail is still visible. In some places it can be negotiated by car, although most of it is passable only by foot, horse or 4-wheel drive vehicle. Some sections are located on private land or Native American lands. The trail is sporadically marked on public lands from the Lees Ferry area to just east of St. George, Uta

As wagon trains and young couples moved along the trail, they stopped to leave their names chiseled in sandstone or painted in axle grease on the cliff walls in several areas. If one of your ancestors passed along the Honeymoon Trail, their signatures may be etched into the stones of Arizona.

Lower Paria Canyon/Lonely Dell Location: Trailhead for Paria Canyon begins at the historic Lonely Dell Ranch near the Lees Ferry boat launch. Before you cross the bridge at the Paria River, turn left onto a gravel road. This road is easy to drive and will not be an issue for any vehicle.

Hike Description: The lower Paria Canyon trail follows the creek bed, which flows year round with shallow muddy water fed by springs further up the canyon. Magnificent sandstone walls streaked with desert varnish rise nearly 1,000 feet on either side. The canyon bottom is dotted with cottonwood and desert willow. The trail is easy to follow and allows the hiker to enjoy the scenery. Early in the morning scope the cliffs with binoculars and you might spot bighorn sheep. There is also the possibility of seeing one of the giant California condors effortlessly gliding through the sky. Spend some time poking around the historic Lonely Dell Ranch where first, John Doyle Lee and later the Johnson family lived. There is an interesting cemetery along the trail where many of Arizona’s pioneers are buried. This is an easy hike and offers its visitors a glimpse into the labyrinth of Arizona’s canyon country. 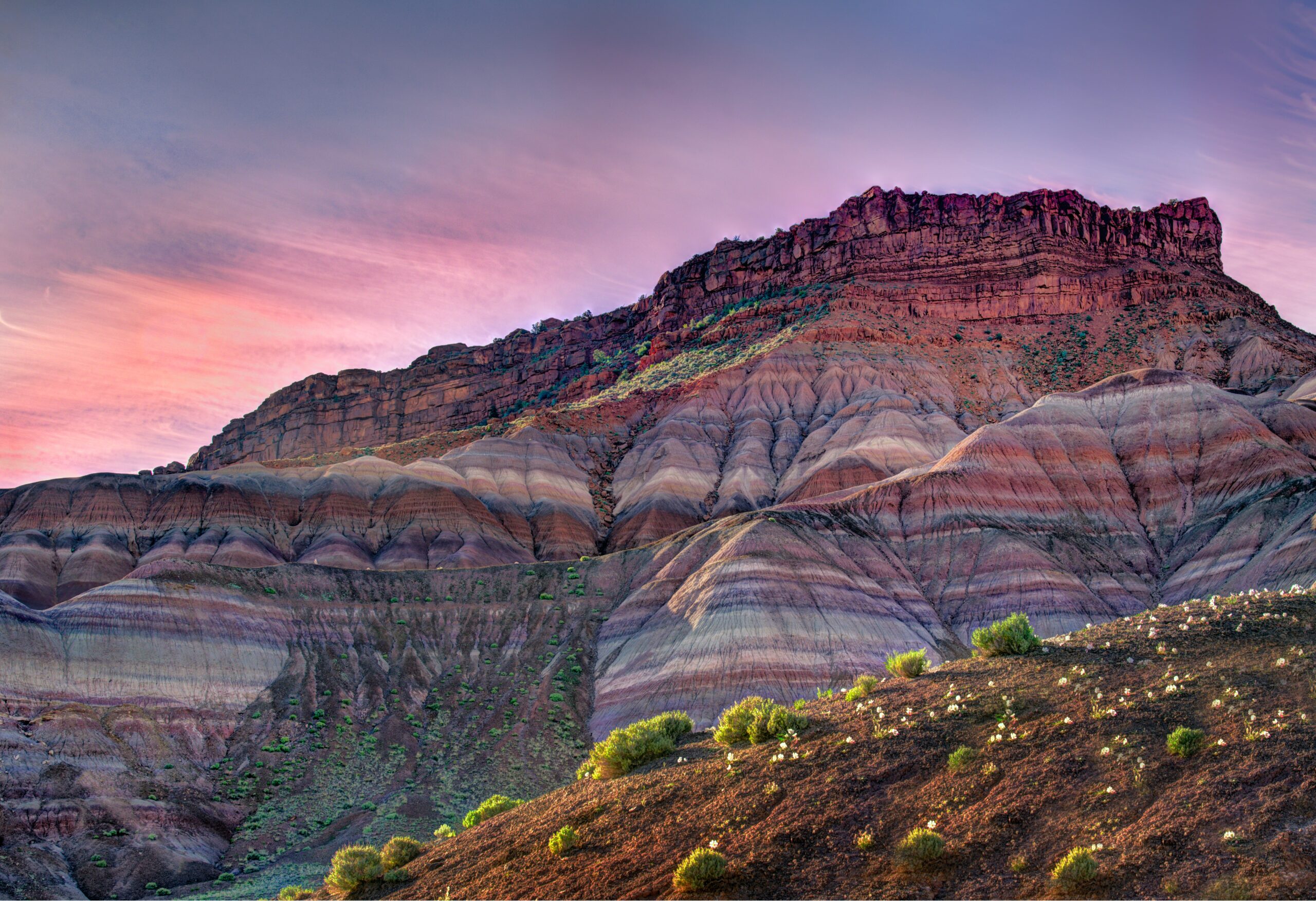 Spencer Trail Location: Trailhead located a couple hundred yards upstream from the Lees Ferry boat launch. There is a sign and rock cairn where the trail takes off to the left.

Hike Description: The Spencer trail climbs to the top of the cliffs above the Colorado River. This hike is considered difficult and not recommended during summer months or to be done by anyone with a fear of heights. This hike will consume 4-5 hours. Expect to do a lot of switchback hiking. It is recommended that you bring plenty of water, 2-3 liters per person. The view from the top is spectacular (absolutely jaw-dropping, guaranteed) with quiet and solitude not found anywhere else. While overlooking the launch point and the beginning of the trail, you will also be able to vaguely see the Navajo Bridge in the distance. Bring some snacks and enjoy the view once you make it to the very top.

Once you arrive at the top of the hike, you may continue straight-bound for a couple hundred yards and you will be able to see the approximate 6-mile turn of the Colorado River, in addition to the city of Page, Arizona in the distance.

Feel free to explore the area, but be careful not to become lost. It is absolutely crucial that you always have a sense of direction.