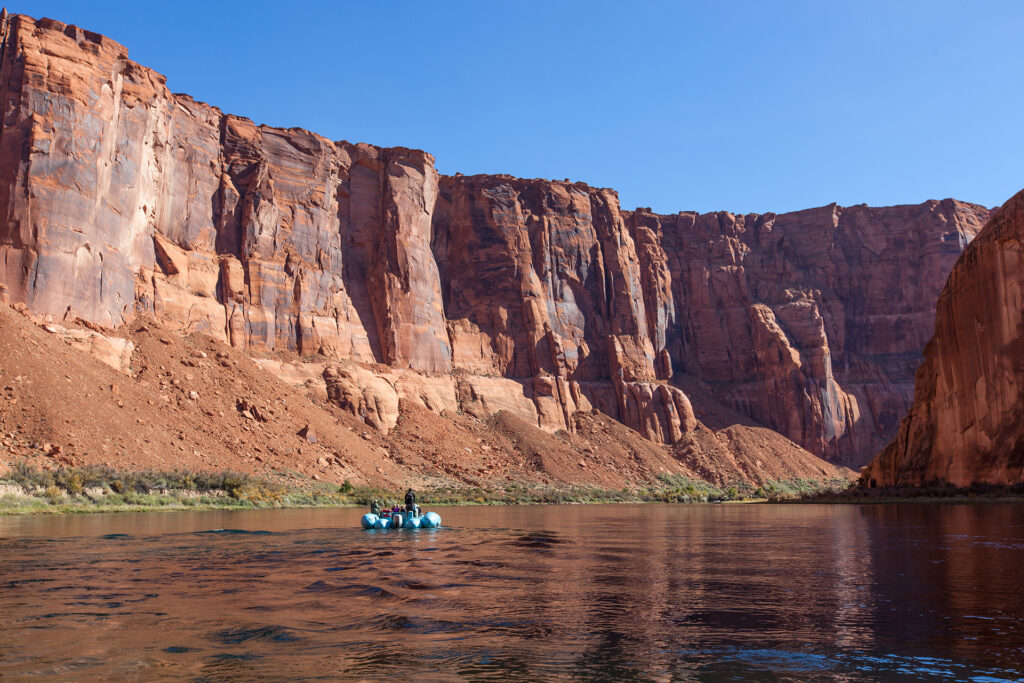 When you kayak Horseshoe Bend on the Glen Canyon section of the Colorado River in Northern Arizona, you continue a tradition that began more than 5,000 years ago, far from the craggy cliffs of the American Southwest.
Contrary to today’s sleek, lightweight, easily maneuverable craft, the first kayaks were constructed by the Inuit and Aleut people (commonly known as Eskimos) to travel swiftly across the water. Located in the North American Arctic, these tribes would build the kayaks out of whatever types of material they could find, including animal skins, bones and wood.
The main purpose for creating the kayak, which literally translates to "hunter's boat," was for hunting and fishing. The kayak's stealth capabilities allowed the hunter to silently sneak up behind animals on the shoreline and successfully catch their prey.

Today, kayaks are built for fun and adventure and widely used recreationally from British Columbia, Canada to Minnesota’s 10,000 lakes to Maine, Florida and the Gulf Coast waters. Kayaks are found nearly equally in whitewater rivers and local lakes. Modern kayaks are fun, safe, secure, easy to handle and a joy in whichever type of water you choose to pursue the sport. 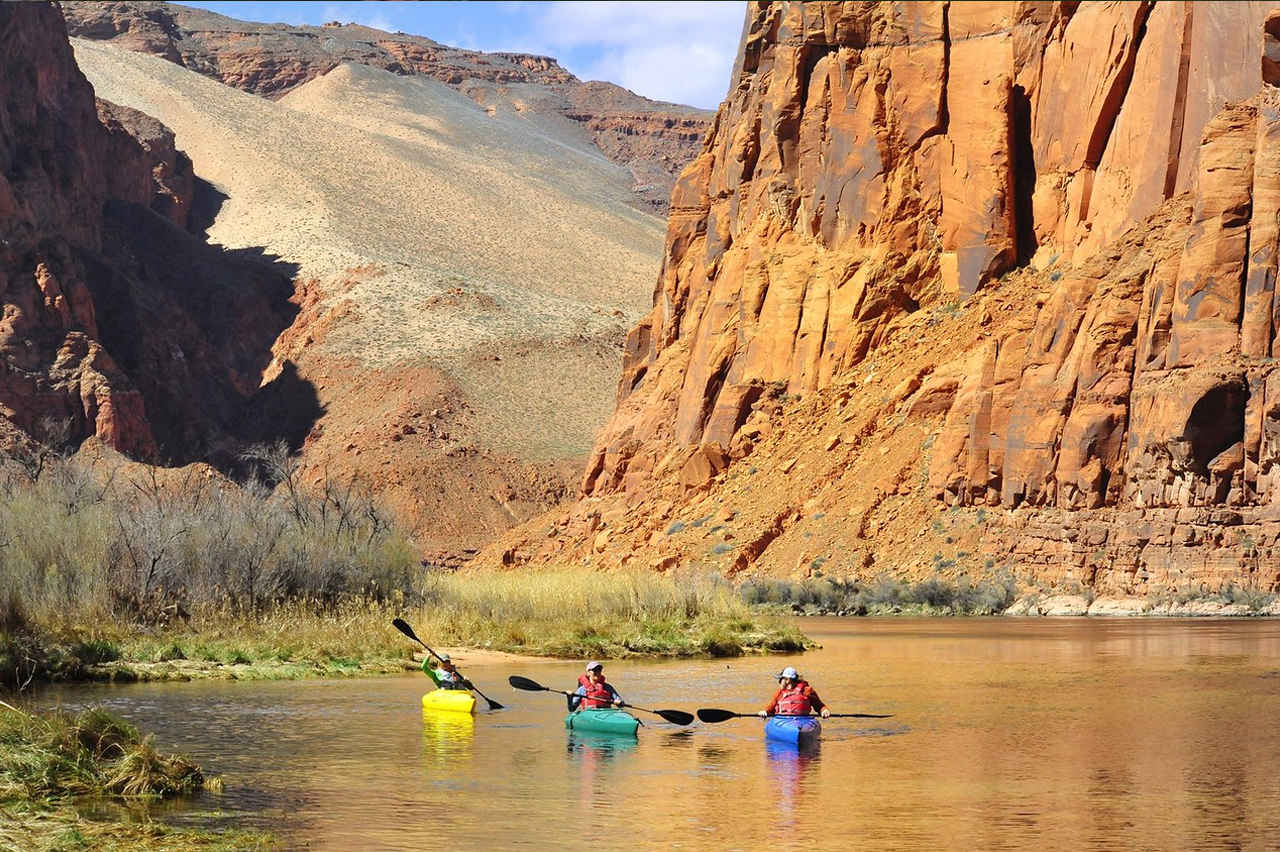 It is highly unlikely that when construction of the 710 foot tall Glen Canyon Dam was begun in 1956 that there was much thought given to kayaking. But the Colorado River below the dam and its Lake Powell, became a Mecca for ’yakking individuals, families and groups. It was purely serendipitous that the distance from the dam and the major put-in and take-out, Lees Ferry, was a comfortable 15 mile float.

It also helped that within that 15 mile float was the miracle of nature, frequently called The Ninth Natural Wonder of the World: Horseshoe Bend.

Technically, the Colorado River’s Horseshoe Bend is an “entrenched meander,” a wide sweep around a sandstone escarpment. As you kayak the bend, remember that it was some seventy five million years ago that the Colorado Plateau uplifted and the meandering rivers that crossed the ancient landscape were trapped in their beds. Over time, the rivers cut through the uplifted layers of sandstone and formed the nearly perfect horseshoe shape. Numerous theories for the presence of “meanders” include random obstacles altering the path of the river, and the idea that the meander “equilibrates” the river to prevent too much sediment build-up in one place.

Where Is Horseshoe Bend? 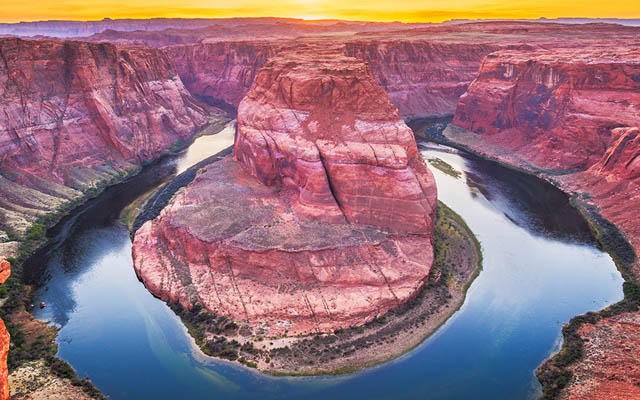 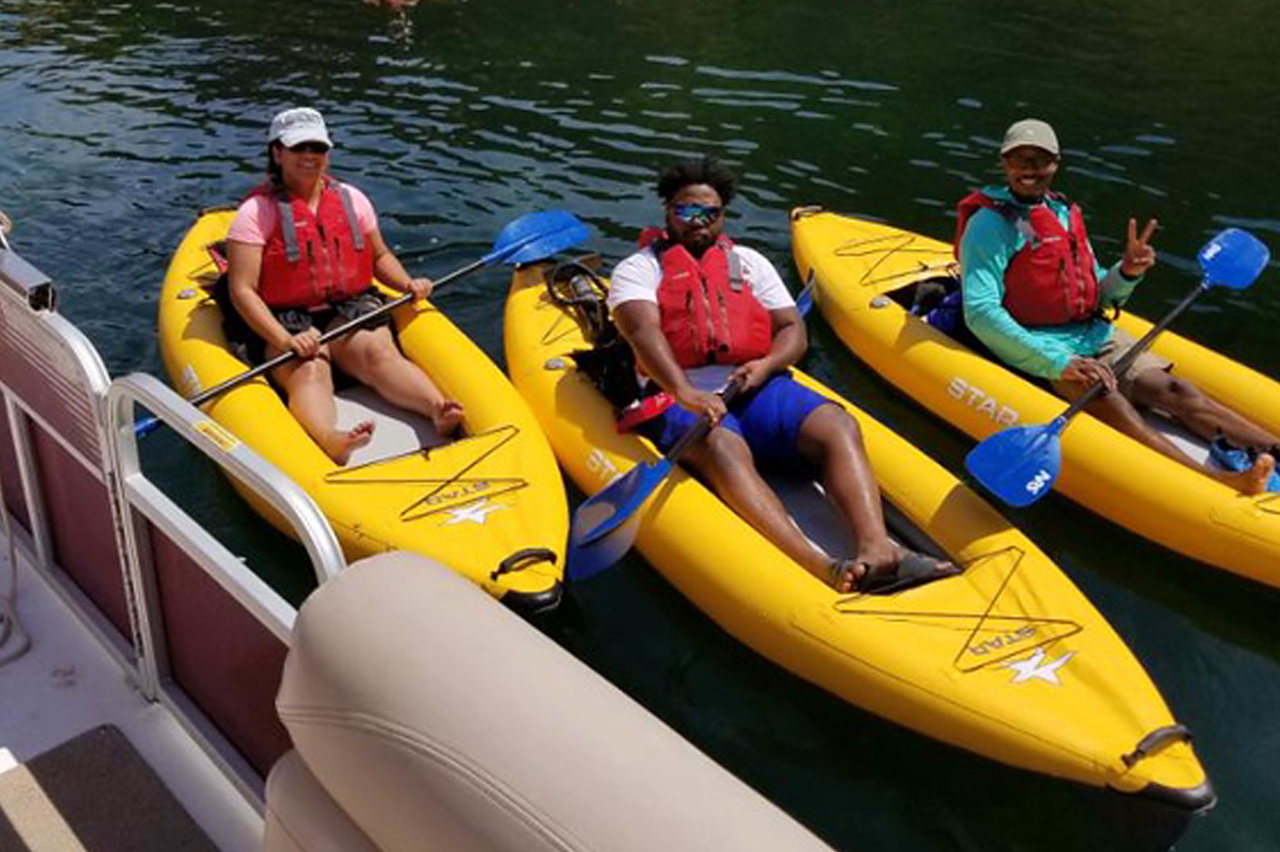 Make the entire daylong float from near the base of Glen Canyon Dam through Horseshoe Bend; or, if your time and ability do not allow for the full day’s float, your skipper will unload you anywhere you choose. Or, carry your camping gear on the backhaul boat, motor upstream and load your ’yak with gear and camp overnight. Then return your boat anytime the next day. An overnight kayak camping trip is a Colorado River/Grand Canyon/Glen Canyon memory that will last a lifetime! 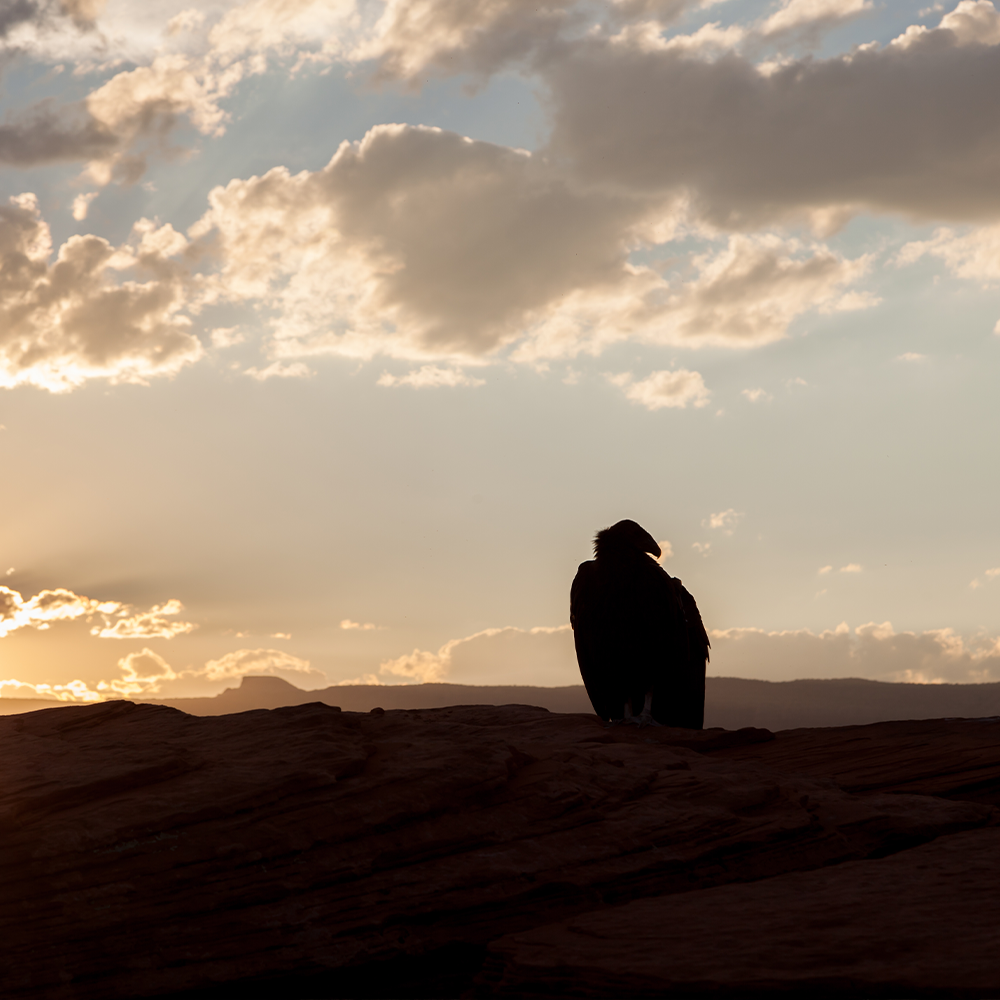 Whether it’s an actual rainbow or our river wildlife – from condors soaring high above to Desert Big Horn Sheep and wild horses slurping river water – these are images not soon forgotten.

You’ll instantly recognize our Desert Big Horn Sheep by their muscular body with chocolate brown fur. They have white fur around the muzzle, rump, and belly. Rams (males) have large curved horns, while females (ewes) have short horns with only slight curvature.  They are the largest native animal in the park, with rams weighing up to 250 pounds.

From your launch point below Glen Canyon Dam, use binoculars and begin to scan cliffs and rock outcroppings along the right hand bank for Desert Big Horn Sheep.  They might be hopping rock-to-rock more than 1,000 above the river on a cliff or down at the water’s edge for a drink.  But wherever you find them, be respectful.  They are a National Treasure!

As you paddle with the current down river, look left and you’ll soon see flat beach areas with plenty of grass, shrubs and other good eats.  Here is where you’ll often see wild horses gazing – particularly in late afternoon.   Do not attempt to go ashore to pet or disturb them in any way.  If you remember nothing else, remember this: They Kick Hard.

As for our winged friends, according to the National Park Service, there are some 350 species to be seen.  Some are seasonal – wintering birds are common – but many are year-round residents.  Probably the two most dramatic birds are the California condor and Peregrine falcon. The California condor is one of the world’s largest and rarest birds, with a wingspan of 9- to 10-feet and weight of up to about 25 pounds.  Just keep looking to your right, up above the 1,500 foot high cliff walls into the bright sky and near the rocky perches. 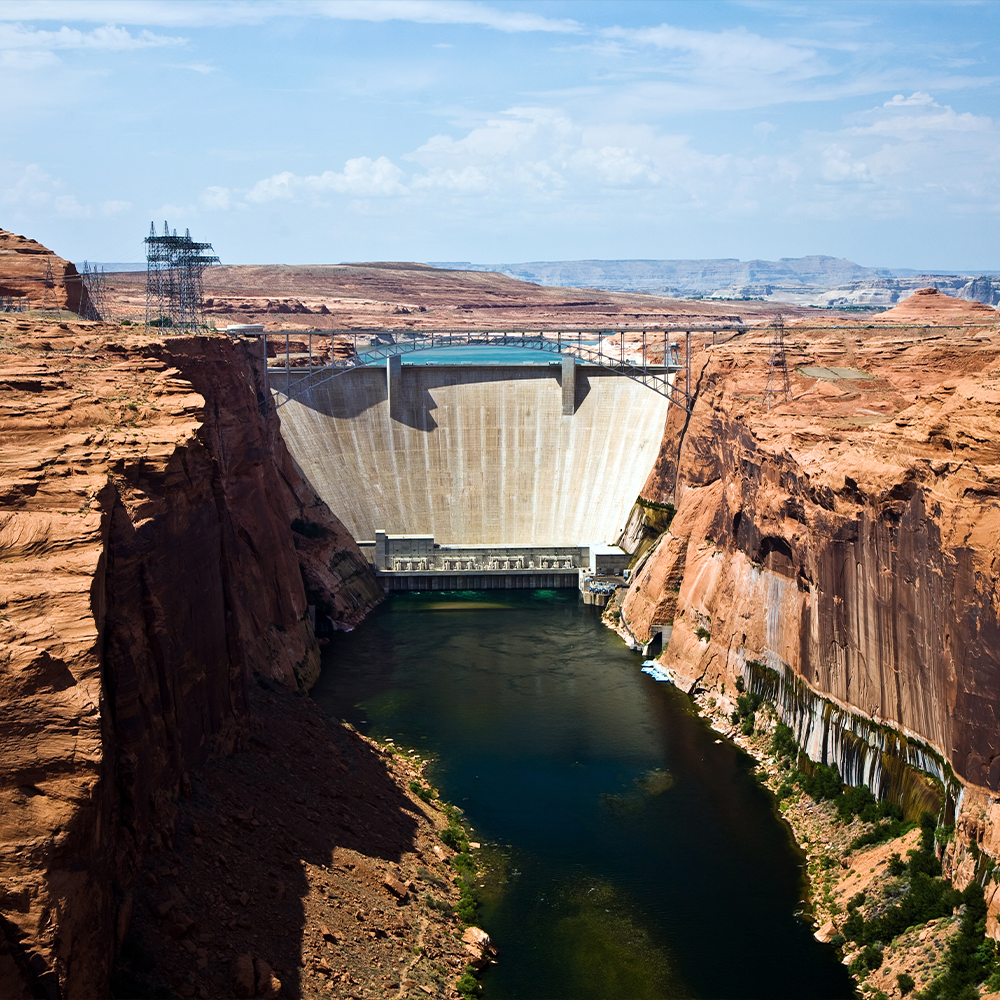 The Peregrine falcons are predators that feed on exclusively on other birds. Common prey includes pigeons, ducks, songbirds, and other falcons. You’ll see them soaring high in the sky – again, generally river right – as they search for prey. Once they find a target, they dive at their prey at incredibly high speeds of up to 200 mph … so if you see a flash, it was probably a Peregrine. They hit the wing of their prey to knock it out of the sky without harming the falcon. Interestingly, while diving, Peregrines use a special bone in their nostrils to guide airflow away from the nostrils, preventing the airflow from damaging their lungs.

The National Park Service reminds us that from 1970 until 1999, the Peregrine falcon was listed as an endangered species in the United States. The pesticide DDT caused the eggs of Peregrines and other birds of prey to develop very thin shells, so that they often broke before the chick hatched. By 1975, only 324 pairs of Peregrine falcons remained in the United States. Thanks to careful conservation efforts – and the banning of DDT – Peregrine populations have rebounded, and they are no longer considered an endangered species.

Look both river right and river left for countless waterfowl including ducks, coots, grebes and loons along with long-legged wading birds.